Europe is generally a very safe continent to travel. However, petty crime can and does happen, especially in large population centres. If you want your visit to be worry-free, getting clued-up on the most common scams is a good weapon in your armoury when it comes to avoiding getting conned.

The following tourist scams in Europe are some of the most common that you’ll come across when travelling the continent.

Hands up if you love a bargain? Us too! Home to several of the world’s fashion capitals, Europe is a great place to grab a luxury item. However, the old advice still rings true… “If it seems too good to be true, it usually is”.

Counterfeit goods regularly find their way onto markets and into tourist hotspots, despite the best efforts of the police to stop them. Even if you know the item is fake, you are still advised not to purchase it. In some countries, such as Italy, simply getting caught buying a counterfeit product is enough to land you with an $8,000USD fine! At that point, you may as well have just splashed the cash to start with!

How to avoid it: Only buy luxury goods from official vendors. And if you can’t afford this, stick with a Primarni special! 🤑

If you’re a sucker for romantic gestures, you could easily fall victim to the rose scam. In this con, the vendor seeks out a couple and tries to give one partner (usually male) a rose to present to his lover. There will usually be a small charge for this.

Although this travel scam doesn’t generate a lot of money, it is often quite successful. No one wants to be accused of being unromantic in front of their betrothed!

How to avoid it: If offered a rose that you don’t want to buy, refuse to take it. Maybe warn your other half about this scam in advance too – hopefully, they’ll then feel less offended when you don’t offer to buy them a rose!

Drink spiking has long been used as a tactic to make pickpocketing easier. In this con, the swindler will slip something into your drink, rendering you drugged. They will then take advantage of your new vulnerability to steal your valuables.

This scam is commonly used in bars and nightclubs. This is because it is easier to pull off in this kind of setting and people who are already tipsy are more prone to letting their guard down.

How to avoid it: Never leave your drink unattended or accept a drink from a stranger (even if they are very attractive!)!

Arguably the worst kind of scam that you are likely to come across in Europe, the fake police con takes advantage of our natural trust in authority. Commonly found in tourist hotspots such as Rome, Barcelona and Paris, the fake police officer or officers, will be dressed in all the kit, making them look very convincing.

They’ll usually ask to see your documents and check your wallet for counterfeit notes or drug money. This is done to steal your personal information and slip cash out of your purse, unbeknownst to you.

How to avoid it: Always tell the police that you will only hand over documents once they have taken you to a police station. You might have to insist but enough refusal and they will eventually leave you alone and move on to their next target.

In this scam, a stranger will approach you and ask if you have dropped a ring. When you say no, they will then pretend to discover a hallmark proving that it is made from gold. At that point, they will try to sell you the ring for a much-inflated price.

How to avoid it: Once you have denied that the ring is yours, try to exit the situation quickly. Many people report that it is nearly impossible to get rid of the scammer without paying something so the sooner you get out of the conversation, the better your chances of success. 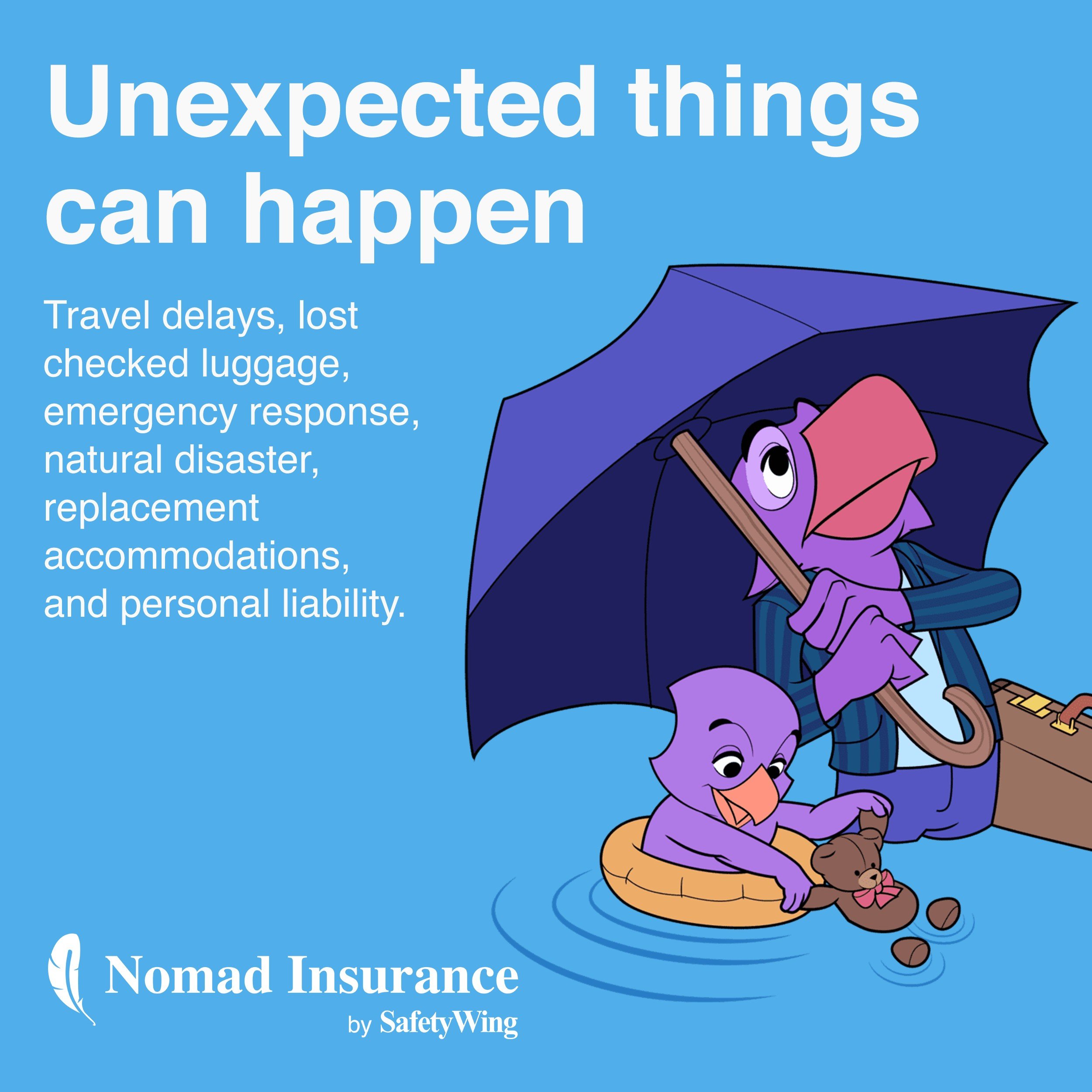 SafetyWing is the travel insurance of choice for scores of backpackers!

Get A QuoteRead SafetyWing Review

Most of us are familiar with the sense of dread that comes with sitting down in a restaurant, opening the menu and seeing a distinct lack of prices. Nine times out of ten, this won’t cause any issues, however, there is always a chance of being caught out in a tourist scam.

Some dodgy restaurants have been known to negate putting prices on their menus so that they can slap you with a hefty bill at the end of dinner service. Another similar way in which this tactic is employed is for the waiter to recommend a local speciality which is not listed on the menu.

How to avoid it: Only ever eat in restaurants where the prices are displayed clearly. If you’ve already been seated and open a menu to discover it doesn’t have any prices, don’t be afraid to walk out.

If you’ve travelled anywhere, this is likely to be a scam that you are already familiar with. In fact, we could have written an entire article all about taxi scams in Europe alone! The most common taxi scams across the continent, involve the taxi driver overcharging you for the ride.

This usually happens under the guise of the meter being broken or no price being agreed beforehand. When the money is demanded, refusal to pay can lead to the drivers getting aggressive and even threatening to call the police. Most travellers will then just pay up, even though they suspect they’ve been scammed.

How to avoid it: Only ever take a ride in a licensed taxi. In countries where the meter is a legal requirement, demand that it be used or wait for another ride. If there is no meter requirement, agree to a price before you get in the car.

We’ve all been there. You’ve just hiked for what feels like an eternity to get the best views over the city and you’d love to immortalise the moment by getting your picture snapped. A kind stranger offers to take your picture and you hand over your camera or phone. Then… they run.

How to avoid it: Never hand over your phone to strangers. It may be a bit of an embarrassing option but it is far better to invest in a selfie stick and snap your own photos!

Pickpockets absolutely love this swindle. Usually, two scam artists will be involved although you often only ever see one of them. As you’re walking down the street, the first of the scammers will throw something at you subtly.  It could be sauce, coffee, pigeon poop – anything.

Once you’re suitably smeared by the spill, a helpful local will offer to clean you up, pickpocketing you as they do. Most of the time, the unsuspecting tourist has no idea what is going on, even thanking the pickpocket as they leave.

How to avoid it: If you end up with something on your shirt or pants, refuse all offers of help from strangers. You never know whether they might be pickpockets!

Let me level with you here: whoever said the best things in life are free, is full of sh*t 💩. If somebody tries to give you something on the street claiming that it is free, you should be immediately distrustful of them.

A common way that this travel scam is executed is via the friendship bracelet. The tourist is walking down the street, minding their own business, they’re then stopped by a street merchant offering to put a friendship bracelet around their wrist.

Before they know it, they are wearing the bracelet and they can’t get it off. It will be at this moment that the merchant begins to demand payment for the bracelet.

How to avoid it: This scam is common in a number of European countries, especially in and around tourist hotspots. If you spot somebody giving out freebies, redirect your route to avoid them. Don’t let anybody touch you for long enough to put jewellery on you.

Essentially an act of fraud, this common scam involves passing counterfeit bills on to tourists. You should always be more vigilant when dealing with taxi drivers and street vendors as many travellers report their involvement in this con.

Counterfeit banknotes are a real problem around Europe and Europol has a specific department designed for tackling this kind of crime.

How to avoid it: Familiarise yourself with official Euro banknotes. This guide by the European Central Bank (ECB) is a great introduction to what to look for when you’re handling cash in Europe.

Europe is an incredible destination for travellers and most visitors are likely to have a stress-free trip. However, scams can happen anywhere and it is always wise to be prepared. Knowing the most common travel scams in Europe means that you’ll be well-placed to avoid them. Oh, and travel insurance always helps! 😉

How many of these common scams have you encountered while travelling in Europe?

Sheree is the awkward wanderluster behind Winging the World, a travel blog designed to show that even the most useless of us can travel. Follow Sheree’s adventures as she blunders around the globe, falling into squat toilets, getting into cars with machete men and running away from angry peacocks.